I did my first ever race this Sunday at Harewood House. It was MINT. 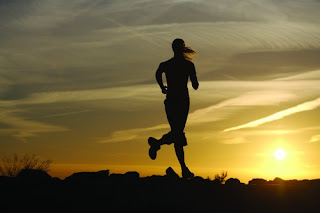 image source
The sun was shining but it was still lovely and cold, which are ideal running conditions when your internal thermostat is constantly set to boil (I am an "easy perspirer").

I'm not going to lie, I was nervous. My shin-splints have been nagging me for months, which put the stoppers on my training programme and I nearly didn't run at all, worried that even if I got round the course I would be too injured to teach classes the following week. In the end, I just said BOLLOCKS TO IT.

I ran with my friend Karen (a recently converted race junkie), and panicked when two minutes before the starter's gun she suggested we run together. What if I puked trying to keep up with her? What I slowed her down and ruined her time? She assured me it was a slow, hilly and very muddy course, and nobody runs Harewood trying to get a personal best, so we should just enjoy it and encourage each other. I'm really glad we did, it took the pressure off completely. 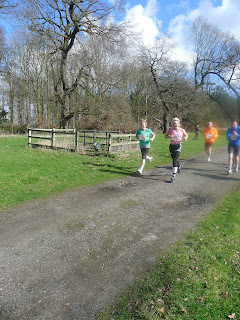 The first 2km were the worst, mostly because I was worried that everyone was passing us (we were late to the starting line due to a last-minute wee situation and ended up squished in quite far up the pack with the superfitties) and because I was being deafened by the sound of everybody heavy breathing - why does nobody tell you about that? However! To my joy, on the first hill I was skipping past people and had to slow down a bit to let Karen catch up. Seems the misery of training up Armley Ridge Road has finally started paying dividends- hurrah!

After that, we sailed. The mud was a bit Bambi-on-ice at times and there was a hideous hill at 7.5km that went on going up, up, up until just after the 8km marker, but Karen made sure I paced myself and didn't get carried away and burn out - and she said I made her push a little bit more than she would have done on her own. So it worked beautifully. We sprint-finished and were both pretty chuffed with our time in the end. 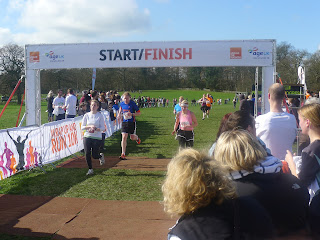 Running Like Phoebe from Friends all the way, naturally
So having been a moaning minnie at how useless I am, it turned out I had nothing to worry about. Makes me wonder what else I could achieve if I just said bollocks to it and got over my fear of failing.

Am now signing up for the following: Meanwood Trail 12k next month, Manchester 10k in May (funds permitting) and the Leeds Run For All 10k in July.

Officially bitten by the bug - and now dying to see what my time would be on a flat road course.