Why would you marry somebody obsessed with new music? You wouldn't - ask Sam, it's a royal pain in the arse. Just imagine having an excitable wife bouncing around about the fact that Terry's Mystic Bunnies are touring, and how you simply MUST leave the house and pay ridiculous ticket surcharges and exorbitant bar prices to stand arse-to-crotch with a load of people younger and cooler than either of you, ON A WEEKDAY, when you'd much rather be at home in your comfy clothes listening to the Doobie Brothers. 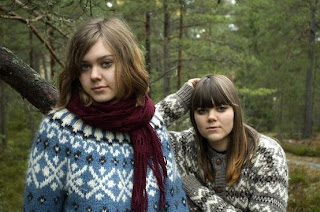 On Tuesday night I went to see First Aid Kit. Their second album The Lion's Roar is truly great, and I tried to get Sam to listen to it, in the vain hope that he might come with me. "Listen to this band!" I said. "They're called First Aid Kit and they're sort of folky... but in a really good way!" I could see the cogs turning... shit name, folk music, no mention of speed-metal, J-Pop or fancy dress. Sam-brain powered down instantly. Before I even got to the "...in a really good way!" bit.

So I put on a brave face and trekked out to the Wardrobe alone.

Oh my God, it was amazing.


The sisters (who are about 8 and 9 years old respectively - at least it looked that way from where I was standing) sing with these unbelievably powerful harmonies that make your blood turn to ice.

I phoned my best friend.

"I'm watching this band, and their voices are so unbelievable that I think I might actually cry. In the middle of a crowd. On my own."

"I say cry," she said. "It will make you look mysterious. You'll be standing on your own, with mascara running down your face. People will think 'she looks interesting. What's her story?'"

Then First Aid Kit unplugged their instruments and played this song Ghost Town without microphones or anything, and got everyone to sing along. And it was so incredible that I couldn't breathe. And my eyes welled up, just as the man in front of me turned around to put his pint down and stared at me, in that rabbit-in-the-headlights way that men do when they sense that the woman standing behind them is a ticking bomb of emotion. I could see him panicking as he searched around for somebody who might be responsible for me. But of course there wasn't anyone.

In the end I felt so sorry for the frightened man that I snapped my tears back into my eyes, stopped being a baby and just enjoyed the rest of the set.

How good would this song be for a first dance?? Flipping ACE.