Maybe it's just that my brain is set to Triumphant at the moment, but all this normal-people-achieving-their-wildest-dreams stuff all over my telly is making me quite embarrassing to be around. You (almost) literally cannot take me anywhere (where the Olympics is on) without me bursting into tears. 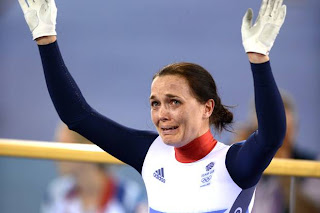 The most embarrassing incident so far was yesterday afternoon. In my defence, I had just had my first run of tearful goodbyes with members at the gym (last shift on Monday is going to leave me in a mess) and had escaped to my own gym in Leeds to run it out on the treadmill. "Ooh the dancing horses are on!" thought me, eagerly plugging my earphones out of Pat Benatar and into the telly, "that'll be a lark!"

It only took one look at the pretty neddy and Laura Bechtolscheimer clapping her hand over her mouth to stop herself crying at the end of the routine...I was off, roaring away as I ran.

Then the BBC only go and make it worse by interviewing her and she loves her horsie so much he did so well and she can't actually speak because she's so choked up by what a good horsie he is.  Then the commentators stop  being able to commentate because it's too tense and they can't actually breathe anymore. Then Charlotte DuJardin (the inexperienced one! the underdog!) wins the gold, and you see her live as she finds out, as the scores come in and the crowd erupt at twenty zillion decibels and it finally sinks in she's won the whole thing, even beating the awesome poised and immaculate Dutch lady ... oh BOOHOOO. I canned it  at 5k. I was in bits. I hope nobody could tell the difference between the sweat and the tears.

All this and I don't even like or understand the dressage.

I could give you a story like this for more or less every day in the last  two weeks.

Anyway, I noticed that Bechtolscheimer and her horse were dancing to this track from The Lion King:


Which is one of those bizarre pieces of music that makes me cry for absolutely no reason anyway, so I really was on a hiding to nothing yesterday. WHY do I cry at the beginning of the Lion King? At no other point during that film - or any other Disney film for that matter, even Bambi - do I cry.  It's just rousing, that's all it is, and that's the problem with the Olympics, they're just too rousing for me to cope with. My emotions have a low Rousing Threshold. An LRT, if you will.

I am frequently found sobbing at gigs thanks to my LRT. Very loud and bombastic post-rock seems to be the worst offender, although I also cried at the Afghan Whigs when I saw them at Primavera, and I admitted earlier in the year to crying at a First Aid Kit gig.

Yes I cried at this when I saw them at Reading 1998. When it goes really loud. It is SO INTENSE.

It's down to an atmosphere, it's down to emotion, I don't know what it is, but I'm sure the Olympics, music, crowds, emotion, all these things are inextricably linked. They all push the same giant button in my brain. A button marked BAWL YOUR BLOODY EYES OUT NOT BECAUSE IT'S SAD, BECAUSE - OH IT'S JUST TOO MUCH SOMETHING I DON'T KNOW BOO HOO (it's a big button, OK).


So. Did you cry at the Olympics? Do you have an LRT? What songs push your massive button?
Posted by Penny at 07:00