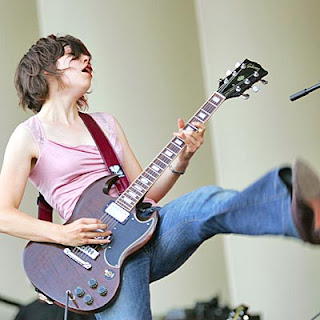 We all know that since time immemorial it has mostly been men with guitars, writing songs about women. Cheating women, gorgeous women, confusing women. Putting them into handy soundbites for everyone to pick up, sing along to and carry through the years until they're embedded as part of pop culture history. Women always the object, and never the I. The more often these legends are repeated "I Saw Her Standing There" "Foxy Lady" "When You're In Love With A Beautiful Woman" (oh how I HATE that song) rah rah rah rah... the more we develop this idea that cultural narrative has a largely male voice.

Come back! I'm not going sociology essay on you, I'm not. You know it's true.

Even when we were teenagers in the 90s they didn't have any ladies on the front of the NME. Because there weren't any, apart from Sonia from Echobelly and Louise from Sleeper.

But now things are starting to change. Now there are lots of women in popular music, and the number is growing all the time. And this is great and I am excited by it every day.

And yet there are still very few women standing up and really playing lead guitar. For some strange reason, it remains pretty rare. There is no anatomical or evolutionary reason why women can't shred - we have hands and fingers and we love to rock just as much as the boys. It's just that spending time sitting in a room and learning, going over that Van Halen lick until your fingers bleed... not many girls do that. I think that'll change though. I hope it will be soon. 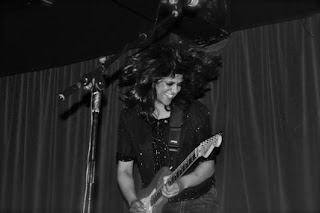 Anyway. Here is a great new band called Nife. Frontwoman Nicky has clearly spent thousands of hours sitting in her room callousing her fingers on a fretboard, and manages to be both a roof-rattling vocalist and a powerhouse of a lead guitarist all at the same time - no mean feat in a three piece. This is proper brilliant 90s stadium-sounding bluesy guitar rock that sounds like nothing else out at the moment. I love it. Here they are rocking out in some manky pub and making it sound like Madison Square Gardens...


My new hero, fact. Their debut album Chemicals is out this week and it's proper ace. Hear more on their Soundcloud here.
Posted by Penny at 07:00