I have long bemoaned the fact that I have never been a bridesmaid. 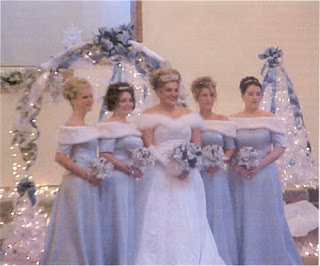 Is it bad that I think these outfits are sort of cute? In ride-down-the-aisle-on-a-unicorn kinda way?

Having been a profoundly geeky and unattractive child I was always left on the shelf when younger (I would have ruined the formal pictures) and having no sisters or close girl mates on the verge of getting married I suppose I thought I'd just twiddle my thumbs for the next few years until my best mate got around to getting hitched.

She got engaged last weekend.

Now there's no date set (not even a ring bought yet) but it doesn't change the fact that she is getting MARRIED and she has always maintained that I would be not only her bridesmaid, but the boss of all the bridesmaids: the Maid Of Honour.

Well, Matron of Honour. Although that makes me think I should look like this:

I hope this isn't an outfit I'm expected to wear as part of my duties.

Being a bridesmaid (particularly a chief one) means you have quite a few  responsibilities. Unless you're a very lucky duck indeed it's not just about turning up and looking pretty on the day. The centre is about to drop out of your best friend's world approximately twice a week (this may rise to twice an hour in  the run-up to the big day) due to a number of contributing factors: uncompromising friends and relatives, not finding the right shoes/napkins/caterer/centrepieces, uncontrollable factors such as weather/spots/illness/boyfriend behaving in a way that makes her not want to turn him into a husband anymore, and on and on and on. As a bridesmaid it is your duty to be there to put the centre back in, or at least give her some gentle perspective. Or a punch on the nose. 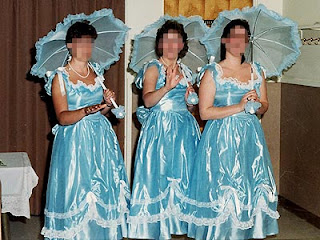 You're also required (in most cases) to co-operate as she dresses you in an outfit of her choosing, possibly do a speech (BF did a  speech at mine, although she did sign up for it before I asked her) and ....organise the hen.

It's the last one that is giving me the fear. Anybody who has ever met my BF, or was at my hen (organised by BF) will know that she is FORMIDABLE at this sort of task, and having to organise a party for the ultimate party organiser is actually making me quake in my matronial boots. She also has roughly a million girl mates (none of whom will want to miss out on a hen of the funnest, most party girl evaaa) so I've got a one-way ticket to logistical hell.

Anway, I'm not under starter's orders yet, so I'm still basking in her reflected happiness without feeling any trepidation. However, I WILL call on you all for your best hen games at an undisclosed date in the future.... 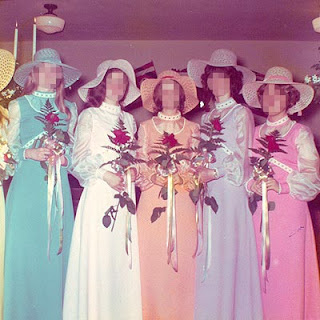 All images from here