Everything is good here on Penny's Planet Of Sound this week! I have actually made some music. I won't do an Andrew Stone and bore on about my microscopic achievements, but I will show you the lovely instrument I have dug out to write on.... 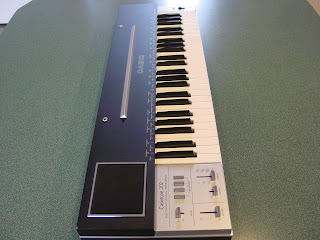 It's a Casiotone 202, manufactured in 1981, and bugger me if everything on it doesn't sound like the soundtrack to a John Carpenter film. Mint! I've also been asked to sing on another electro-poppy project of a friend's, which will probably be ace because he's irritatingly talented. So at least one new year's resolution is going swimmingly - the making music one. Still no closer to reading Anna Karenina, however.

Anyway, enough drivel. Onwards with your workout soundtrack part two! If you missed the first part, you can find it here.

7. Currently we're cruising in the middle of the workout and the endorphins are still (just about) hanging on in there. Ladles and jellyspoons, I give you the Damned:


How amazing is this song? It's just fucking great. It's got that feeling of relentless forward motion which works brilliantly for running. Punk rock with a good, driving bassline actually works well for most cardio-vascular exercise. It propels you onwards.

8. It's around about 2/3rds of the way through anything gruelling that you may find you start to hit a wall. At this point you'll need music with a powerful chorus to give you a little kick up the bum. As far a quiet/shouty/quiet/shouty stuff goes, this song is hard to beat (unsurprising, given the Pixies DNA of this band). Overplayed? Nah - it's a rock club classic:

9. I couldn't let this list go without sneaking in one of my favourite bands, and what I consider to be their most awesome song. You might think this sounds like a drunk man with a sore throat shouting over a load of noisy nonsense, but I still think it's one of the most exciting things my ears have ever heard:


10. When you're flagging it's useful to have a box of psychological tricks to draw upon to push you over the hump. Some people have mantras to gee themselves up, but music can work just as well, if not better. If a song makes you feel angry or excited, then you'll automatically release adrenalin, which can give you that much-needed boost. This song makes me feel defiant, whenever I hear it. I bloody love Joan Jett.

11. In the spirit of the rock club, I'm going to play something a bit fun and cheesy at the end. I'm currently trying to work on my running ready for the Harewood 10k in March, and a run playlist is not complete without this on. Honestly, run to it. Listen to the words. It's so obvious, but obvious and feelgood is what you need at this stage. It's THE BEST running song, possibly EVER. And please, please watch the video. There are moustaches, leotards, shiny gold trousers and some excellent lessons in layering from the main man Matthew Wilder himself:


That's it from me for this week. Have lovely weekends all! May your moustaches always be full and bushy.
Posted by Penny at 07:00