"You have your fans, I have mine.
Someday your fans are going to work for my fans." 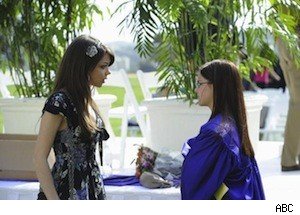 There are so many glossy youth programmes around that deal with hot girls fancying hot guys and vice versa. Lands of make-believe where beautiful people stand around wearing beautiful clothes and smoulder at each other while Death Cab For Cutie play in the background. Maybe it's symptomatic of a society craving escapism that we only wish to gaze upon things that are unchallenging for our eyes. Whatever. The upshot is that I sometimes feel myself slipping into a daydream where I actually start to believe my own teenagehood was this lip-glossed and spot-free.

And it really wasn't.

That's why it's so funny, and so refreshing when (in the latest episode of hit ABC show Modern Family) super-popular Haley Dunphy expresses disbelief when her geeky little sister Alex stops a gang of bullies in their tracks. Because the bespectacled, frizzy haired bullies are in love with Alex. "oh my GOD it's Alex Dunphy!" they swoon. Finally the square girl has her own legion of admirers - the nerds. 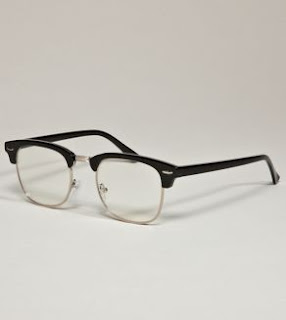 I remember the first day I realised that, far from being at the bottom of the hierarchy of fancying, I was, like Alex, on a different scale altogether. That it was actually possible that I wouldn't spend my existence in a terminal science lesson pining for That Boy to ask to borrow my set square, with nobody ever desperate to lend me theirs. It was the day Nick from the year above threw me into the sailing lake (in the nicest possible way) and I realised that some boys fancied me. A certain type of boy. The nerd.

This progressed through college and into my adult life. I don't think I've ever had an ardent admirer who wasn't at the very least a bit of a nerd. And nerds are GOOD, they're clever and focused (on sci-fi/record collecting/Russian cinema, if not anything else) and because they're not great at sport or being cool they're forced to learn to be VERY FUNNY in order to get through their teens without being beaten up. So two fingers up to the Haley Dunphys and their flakey, good-looking boyfriends. You only need to look on Facebook to see how the people who were top rung popular at school turned out.

The girls who chose the nerdy boys win. 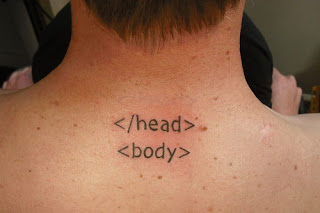 Another nerdy tattoo - Sam's is even better

Although we now all have houses full of Ghostbusters figures to dust.

Now, you must all go and watch THIS for a far more accurate representation of life than that portrayed in Gossip Girl. Please. It's amazing.
Posted by Penny at 07:00