Last week I talked a little bit about tolerance regarding other peoples beliefs. I firmly believe that, providing it harms nobody else, people should be allowed to live their lives without fear of derision.

Not to trivialise this sentiment, but I hope you will extend this tolerance to me today, as I am about to reveal a passion of mine that I know some of you will find distasteful.

Because I love JEDWARD. 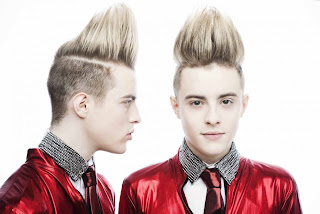 I mean, I LOVE them. I can only be sad for so long when Jedward are on my Twitter feed with their absurd, dadaist stream of consciousness. Their wonder at the world around them is infectious and delightful. You say they're talentless? I disagree. They are more entertaining than a thousand silky-voiced cruise-ship bores. In fact, they don't really need to be able to sing or dance, I could listen to them talk all day. Or just marvel at their existence.

I will admit to watching Celebrity Big Brother 24 hour feed just to see what they were going to do next.

And I am still not bored.

I am baffled by how divisive they are - people either "get" Jedward, or they don't. How do they invoke such rage from the haters? What grumpy buttons do they push? There are people in positions of political power who are perhaps not cerebrally blessed, wouldn't we be better off getting pissy about them? And I don't think Jedward are stupid anyway, they just have a different way of looking at the world. And why not.

Jedward's new single Wow Oh Wow (the THIRD release from their SECOND studio album believe it or not - co written by Oriste from JLS) was released last week, and you can listen to it here
Posted by Penny at 07:00