You need to see this film if you haven't already. Really. 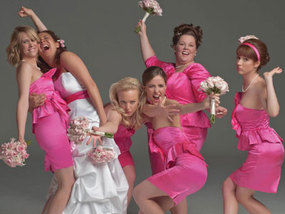 I watched Bridesmaids for the second time this weekend, and I can confirm that it's still brilliant, still poignant and still spit-out-your-cup-of-tea funny on repeat viewing.

Why does this film feel like such an anomaly? I don't understand it.

I don't understand why the pain and absurdity of female friendship still goes largely untouched in cinema. I don't understand why female characters in romantic comedies mostly just Nice Girls and not ever geeky and embarrassing the way my friends and I are when people aren't looking (and sometimes when they are). And, most of all, I don't understand why Hold On by Wilson Phillips isn't my karaoke song. I mean, I know all the words. I wouldn't even have to look at the bouncing ball . 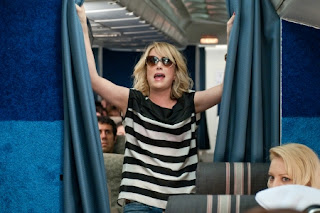 Sam says this is the bit where Kristen Wiig reminds him most of me. When she's DRUNK and HIGH. Thanks Sam.

Seriously. My Maid of Honour and I were going to watch this film the night before the wedding, and I'm sort of glad we didn't (it lost against Dirty Dancing, in case you were wondering).  I'm glad because this film actually touches on quite an uncomfortable element of getting married.


Becoming a Mrs is a big part of that time in your 20s and 30s where you're both already building lives separate from each other. Establishing proper careers, moving to new cities and forming real, actual, legally binding families. With babies and everything. All of a sudden your not-on-paper family who have been with you through the party years, well, they need to evolve and grow with you somehow, and that's not always easy.

Bridesmaids is about being the one who gets left behind. It's about status anxiety (over career as well as relationships) pulling apart two girls who have been friends since they were little. Girls have a tendency to build these super-intense friendships as we grow, and (even now) there is a tendency to feel a sense of loss as things shift and change, as well as a compulsion to compare our own progress through life unfavourably with that of our friends. Not always helpful. 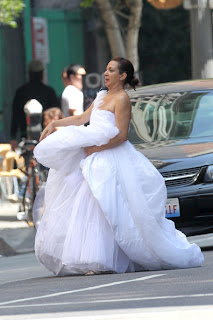 Although if your friend got married in a ££££ dress and THIS happened you'd be too busy mopping up her tears of shame to compare yourself to anything.

No spoilers here, but obviously life has a way of working itself out in comedy land. And I firmly believe that we tend to keep hold of the good friends in reality too. The ones who help you forget your insecurities and just let you be yourself, even if you're taking things at your own pace, even if things aren't quite working out the way you'd planned it when you were both 12 years old.

That's what friends are for, Hollywood! Letting you be your idiot self.

And holding your hand and singing you power ballads while you do it.
Posted by Penny at 07:40