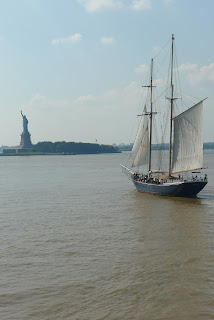 But the best bit of our honeymoon in New York was Arlene's Grocery. The morning after we both sang, triumphantly, at their famous live rock band karaoke night (mere days after Jim Carey trod the very same boards), we both declared it the highlight of the entire holiday. Then I said, unthinkingly,"it was the highlight of my year!" and Sam agreed. And then we went Oh Shit, because we had forgotten our own wedding.

We reflected on the statement, and decided we were only half wrong. The wedding was undoubtedly the most important moment of our year, possibly of our lives so far, but was it the most fun? Ummm...

NOT compared to this. It sounds silly, but this was us both living out our rock 'n roll fantasies, with no cost, no stress and (the most important bit of all) nobody to worry about but the two of us having THE BEST TIME. Yes there was terror. But this time, it was a fun kind of terror.

Because, for both of us, being the centre of attention is SO much easier to deal with in a room full of strangers when you're pretending to be heavy metal superheroes than it is on your wedding day.

We wandered into the venue knowing nothing, thinking it would be a standard karaoke set up, only to find a bar packed with 150 people with eyes riveted to the stage, and a roster of semi-professional regulars getting up and singing INSANELY well. We had already signed up to do a song by this point, and were both soiling our pants with fear. You want to knock the confidence out of 99.5% of X Factor contestants? Send them here. The girl who was on three acts before me was probably the best live vocalist I have ever heard. EVER.

Suddenly it was like the wedding all over again.... two people, utterly out of their depth, hanging onto each other and wondering what the fuck they're doing.....but doing it anyway, because they just WANT to SO badly. We were both shaking. We may as well have been back in that registry office.

We played the first-timer under-dog card, and being a honeymooning British couple got us some good back story points and crowd support. Then Sam bounded onto the stage and did his first EVER full band vocal performance to Judas Priest's Breaking The Law and was BRILLIANT - his awesome rock rumble and flailing on stage won the (very noisy and enthusiastic) crowd over. So proud of my husband! 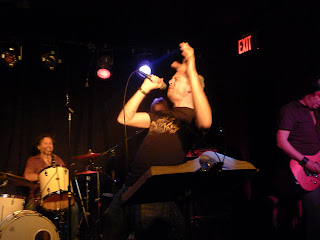 Breaking the law, breaking the law, DUR-DUR
Next I got up and did my meek-little-girl bit, then sang the Trooper by Iron Maiden with the best Bruce Dickinson wail I could muster. Crowd roared at the end of each line I sang (possibly not expecting that 'orrible gruff rockness coming out of a dizzy English blonde), which only egged me on to start bouncing around, air guitaring and punching the air. I looked a total plonker but the Yanks loved it. Sam and I walked back through the crowd getting high fives off every single person, and props for the entire rest of the night off nearly everyone there. It was so surreal, I felt like we were in our own personal School Of Rock. 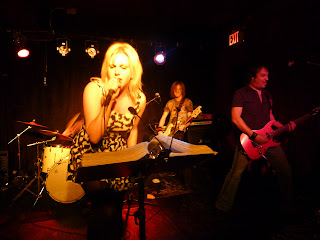 Metal's answer to SuBo
We spent the next 24 hours in a daze of pride and glory over the Team Braz-Smyth triumph. We wished we could do it every week. And I'm just so pleased we did it together - not just that night, but the whole holiday, like partners in crime, answerable to nobody, no worries, no consequences, just going out every night and seeing what happened. As a result, we met some amazing people and had some fantastic (and some downright bizarre) experiences.

Seriously. Our wedding day was special, and significant, and brilliant. I wouldn't have changed a thing. But Sam and I are stressheads, we were never going to completely relax and enjoy it.

So for us, going on honeymoon was an adventure and a rush far beyond our wedding day. Finally we didn't have to think about anything apart from doing exactly what we wanted. It felt like our reward for all the stress and work. At last we got to be together on our first ever proper big holiday and enjoy hanging out, being silly, crashing parties, making friends and -the best bit- just being together. 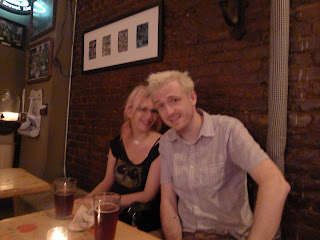