First Dance Friday: Flying It Under The Radar

Although I have never been the type of girl to idle away her formative years fantasising about puffy dresses and ten tier cakes, I would be fibbing if I were to say I never contemplated my wedding day before I got engaged. And one of the few things I did bother to think about was the first dance. 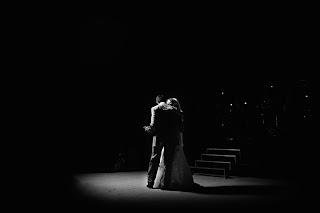 Image
I knew it was going to be something that summed up me and my future spouse perfectly. Relationships came and went, and with each one there would be A Song, or at least A Band, something appropriate and romantic floating at the back of my mind. And I would be ready, poised, just in case we ever made it to the point of wanting to spend the rest of our lives together.

But with The One, there was not a The One. I became painfully aware within about a year of going out with Sam, that we didn’t have a song. Nothing you could call Our Song anyway. You know. A lighters-in-the-air, sobbing into your pillow after your last argument, driving along together on spontaneous road-trips on sunny days song. You know the ones. YOU KNOW because you’ve had them. That’s what your first dance is supposed to be.

What’s a girl supposed to do? She meets the perfect man, yet there is a ballad shaped hole in their relationship that needs filling. Panic sets in. What if he proposes? What will they do? Sit through both of their entire iTunes play lists in a desperate bid for some sort of romantic connection? Weeks pass, months pass, the wedding approaches and still they can‘t agree…“No LISTEN to this Fleetwood Mac song properly! You must remember! We listened to it together in that pub that time, and it was all romantic! You bought me a cider and black! You must remember!”

I knew this had to be nipped in the bud before it became an issue.

So I made Sam a mix CD. And in the midst of all that thumping electro and ball-busting heavy metal, I dropped in a classic tune, a tune he could not fail to be wooed by. There is no way around it people, this song is GREAT. It’s winsome and woozy and heady with the feeling of knowing you’ve found the person you want to be with for the rest of your days. And best of all, it’s in no way obvious. If I was John Cusack in High Fidelity, and Sam was the bird off it, this is DEFINITELY what would happen: I make the CD, Sam plays the CD, falls in love with The Song, and because I had introduced him to it, it would gradually become Our Song without him even noticing.

After about a fortnight of my frankly awesome CD being in constant rotation on the car stereo, I ventured to subtley inquire what Sam made of this 1970s masterpiece.

Three years later, we got engaged. I gently asked what he thought about having this song as our first dance. “That Todd Rundgren song!” I chirruped, “you know, the one I put on the mix CD! You used to listen to it all the time, and it was all romantic! You must remember!”

Not only this, my efforts were doubly futile, a on closer inspection of the lyrics it appears the song is actually about a break-up. Well, it just serves me right for trying to be sneaky (and vaguely psychotic).

I’d like to say I learned my lesson, but I persisted for a further nine mix CDs …. In fact my CD burner gave up before I did, preferring to emit a gutteral whirring noise and spew out its contents in a puff of smoke than participate in any more of my musical manipulation. Ah well. Seems that if you’re destined to spend the months before your wedding painstakingly going through both your iTunes (I went over mine three times, and that is no small list) then that is what you will do, and no amount of subterfuge is going to help you.
Posted by Penny at 13:28