It gives me genuine pangs of horror when I remember how I looked upon moving primary school, aged eleven. A chunky girl, "tall for her age", sporting the hairstyle of a 1970s footballer and a pair of whacking great specs that took up most of her face.

It was the glasses that really did it. They had thick, transparent plastic frames and cheerful contrasting arms the colour of the boat on a Blue Peter badge. They were the worst possible accessory for an eleven year old girl to have in 1992. A girl who suddenly realised that, for the first time in her life, she was going to have to try to fit in. 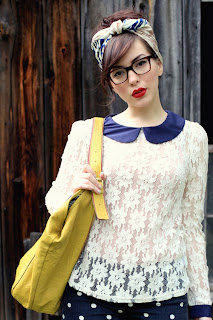 No amount of being good at drawing cartoons or spewing forth hilariously witty banter could save me from being mercilessly picked on in that first year. Come puberty, I was written off as an asexual boffin while everyone else was getting off with each other behind the bike sheds (no cliche - we did have them, and that's where people did it). I was at a disadvantage. Because the fact of the matter was - if you wore glasses in the 1990s and you were under the age of 30 then you were about as far from trendy as you could get. You would need extra glasses on your glasses to even be able to begin to see the letter F in the word Fashionable. You were screwed. 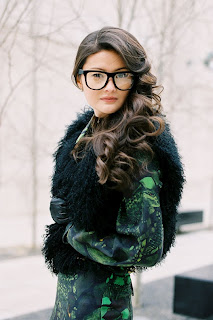 image by Vanessa Jackman
Now look at all this here, today! All these trendy pretty people with specs on their faces! Gogs are so fashionable now that people who don't even need to wear them are poking their fingers in their eyes so they can go down to Dolland & Aitchison and get a pair of Dame Ednas. People actually wear frames with just plain glass in them! Like sunglasses but without the sun! Or the point! 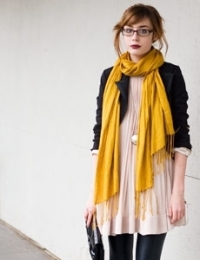 It's too late for me now (too old for the current vogue, too young for the awesome Molly Ringwald-style charity shop granny glasses in the 1980s), but it does make me feel relieved for the short-sighted teens of today. They might actually get their first kiss before the age of 42.
Maybe people get taunted now for not wearing glasses. Just think!
Posted by Penny at 07:00