I was about to write "TV Show" and then realised what I was doing and nearly bit off my own hands.

Anyway. LOOK! This telly prog is amazing! AMAZING I SAY! 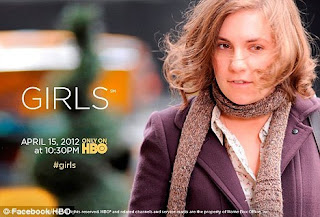 It's called "Girls" and it's an HBO one so you know there's no spray tans or lazy characterisation about to go in your eyes. It's about some - er - girls. They live in New York and they're very real and very, very funny. It's like Sex and the City if Sex and the City drank cheap lager instead of Cosmopolitans. There are tattoos and Twitter and willies in squirrel jackets and drawn-on eyebrows and it's just really really good.

Plus it's written and produced by women, including Lena Dunham whose life it is sorted of based on, and she also plays the main character so you know when she gets caught in uncompromising positions her pain is all real. And also because she looks real, like a real person that you know. Maybe even yourself. 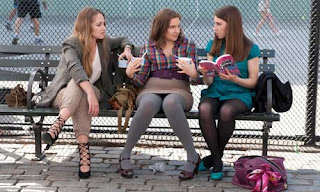 Also there is an English character called Jess who has totally made me rethink my feelings about hareem pants.

I have no idea how you're going to watch it. You might have to fly to America to do it. Or maybe I'll buy it you for your birthday. But however you do it, you must do it. I have not loved anything this much since Freaks and Geeks, which is my favourite ever telly prog, and I'm thinking rather rashly that I might even love this more. MORE THAN MY FAVOURITE EVER TELLY PROG.

There are so many caps in this post. You know I mean it.
Posted by Penny at 07:00