I know I'm late to the party on this one, but did you hear that James Bond is now drinking Heineken?   Gone are the super-styling martininis - the Dutch lager overlords have bought their way into the 007 legacy, and Daniel Craig will be drinking Heinies in the next Bond film.

I don't understand. Isn't this like Carrie Bradshaw ditching the Cosmos in favour of Lambrini? Is it.... (whisper) possibly even worse than that? 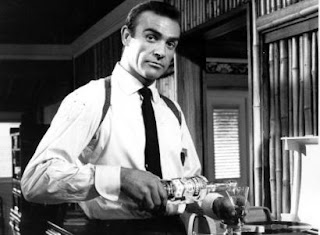 I mean I do appreciate the film-makers' position. I know that Hollywood movies have to pay for themselves somehow, and that corporate sponsorship and product placement are standard practice for big budget films now. Never one to miss an opportunity to illustrate a point with a clip from Wayne's World, see below for horrible evidence of this (a terrifying 22 years ago):

It's almost acceptable for other films now. All these slick, CGI-addled, slightly green-looking blockbusters starring Tom Cruise generally need cars for the characters to drive around in and mobile phones for them to use, so who really gives a monkey's chuff if they're driving an Audi/ have an iPhone welded to their ear? The characters are so woefully underdeveloped and the products themselves so uninspiring and modern-techno-iBlah that it all just melts into a mush of boring and nobody really cares.

But making James Bond's drink of choice a Heineken fundamentally changes his character, and cheapens the Bond legacy. A man in his late 30s/early 40s who drinks a martini is a completely different man to one who CHOOSES to drink Heineken. Note: CHOOSE. James Bond is not going round to his mate's house for a barbecue on a Sunday afternoon and politely taking what he's been offered. NO. James Bond, the international spy, is going into a bar where we assume there are many drinks on offer, and he is CHOOSING to drink Heineken. JAMES BOND. Not a student in a Walkabout bar down to his last fiver. 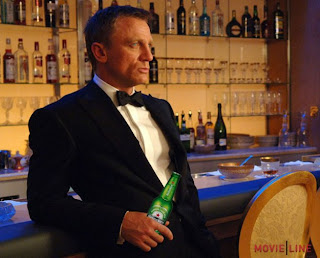 
I don't object to Bond being a beer drinker per se - I just assume he'd go for a nice Belgian craft beer. Something strong and tasteful, in a slightly ritzy looking glass. He is, after all, the original metrosexual man.

I can only assume that Skyfall is set at a large, rubbish corporate music festival where there's only one tap at the bar.
Posted by Penny at 07:00