This weekend (pre- Thumb War), Sam and I pottered down the canal to the Abbey Inn in Newlay for one of their regular beer festivals.

Ever since our mini-moon in Masham, land of brewery tours, I have been something of a wannabe beer geek. I like the idea of using Jilly Goulden-style elaborate descriptions too, so getting ickle tasting trays like these and writing tasting notes on each beer made me feel very important. 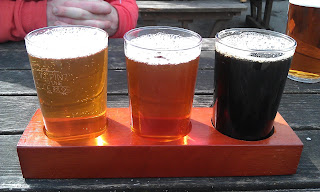 The Abbey festivals vary in size, and this was one of the smaller ones, but the pub was still rammed. There were a good selection of guest beers on tap for the event, and a load more exciting and unusual looking bottles and cans, like this Hawaiian coconut beer.... (it didn't taste of coconuts, sadly, but it was very nice). 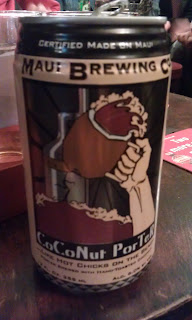 The dinky tasting trays made it possible for us to sample nearly all of the draft beers between us without ending up in A&E, and with the notes given on the tasting sheets I thought I might actually begin to work out if there's anything in common with the beers I enjoy drinking.

Finally I understood what "hoppy" meant in terms of taste, and at first thought that hop-heavy beers might be my favourite.Turns out you can't drink a lot of the stuff without it getting overbearing though, so after one round I had changed my mind again.


In the end I discovered that the only thing the beers I like have in common is that they are all VERY STRONG.

These were my two favourites: 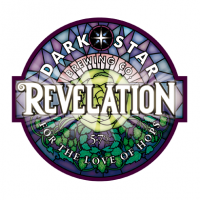 Beer festivals then. Starting early and mixing a lot of strong ales WILL turn you into an embarrassment, and almost certainly give you a headache on Sunday.

Now tell me some good beers that you like!
Posted by Penny at 07:00