I've had nearly a full year of being 30. In a mere two weeks I will be officially a thirty-something.

I didn't have the best time in the last decade, all told. It was mostly a hair-tearing nightmare. But turning 30 has been a triumph. In spite of the last 12 months still being something of a bumpy road (the last few weeks worse than most - I nearly didn't post this after last night's latest disaster) I think I'm getting more confident in my ability to deal with the relentless shit-slinging. I think this is what growing up actually is.

It's a cliche to say turning 30 changes you, but it has been true for me.

Aside from getting married, the last year has been a tough one. But it's helped me realise that I can cope. If you can lose your career once and survive, then why not twice?  It's stopped me taking anything for granted - if my health is not good, there is always somebody having a much harder time. It's given me confidence to be brave, live more in the moment, to try things. I'm learning that real success is nearly always hard won, and much sweeter for it.

All this is definitely easier when I'm lucky enough to have amazing family, and friends, when my life is still interesting, I have not lost everything (yet) and getting married has made me feel more confident than ever in my support network.

Still, it is hard not to compare myself to my peers. To realise that I'm not where I thought I'd be at 31. To feel I have taken my early straight-A student promise and squandered it on two unpredictable and badly paid careers, one failed and the other floundering.

After Steve Jobs died, I read this for the first time: 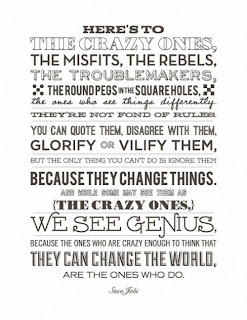 I wouldn't be so crass as to call myself a maverick, and I'm certainly no genius. But I keep reading this and it gives me hope.

And I really need to cling on to that last bit of self belief.