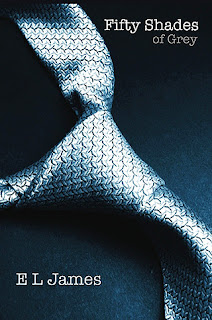 Having had two moderately-high-brow previous book club reads (Where Angels Fear To Tread and Tender Is The Night), we've decided to go all self-published e-book 'orrible with our next choice Fifty Shades Of Grey.

I am only mildly apprehensive because:

-in spite of its ubiquity, I've not heard anyone say it's even alright, let alone good.
-on the Wikipedia entry it mentions that it was originally intended as Twilight fan-fiction, which is Fifty Shades Of Fucking Horrible whether you like Twilight or not.

The rest of me is just delighted we have snuck another smutty book into Book Club, regardless of the fact that I got annihilated for choosing Riders a couple of years ago. Although I'm hoping it's not as graphic as The Story Of O, which I could barely talk about because I was so embarrassed.