We should all know by now that inappropriate clothing is my favourite kind.

Sky high shoes, ridiculous hats, frilly skirts, unnecessary makeup, side ponytails. It's like every day is fancy dress day for me. Instead of becoming a mature grown-up, I seem to be retreating further into my dressing-up box as the years roll by.

It started innocently enough with my annual pilgrimage to the Secret Garden Party  (where other inappropriate dressers are triumphantly outed in an explosion of glitter and animal masks - allowed to roam free wearing handbags as hats, and knickers as earmuffs) , and now my recent holiday to Williamsburg where daily dress is, quite frankly, bizarre. Yo, the camel called, he wants his toe back

But I have to say, sometimes it annoys me on other people. I find it laughable, irksome or at worst  offensive. And we all know I only moved out of Headingley because I was sick of the Otley Run forcing me to queue behind wacky students dressed as smurfs in Safeway every Friday night. Grow up! I thought, hypocritically.

Then I looked back at my own wardrobe.The Frank Usher shoulder pads, the stripper shoes, the garish makeup, the over-sized spectacles.

When does expressing yourself turn into looking a fool? I may not be wearing anything with a press-stud front, or ears, but surely I'm old enough to know better.

This website, say it all really. The line between fancy dress and normal dress has blurred to the point that we can't tell who is taking what seriously anymore. And that's not just in Williamsburg - it's everywhere. I saw somebody dressed as a tiger in Kirkstall Morrisons last week. It's like everybody went to a festival in the summer and just couldn't be bothered to go back  to wearing their normal clothes. 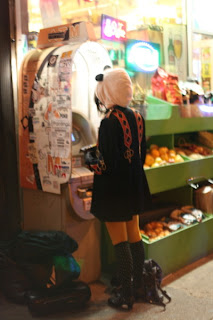 Maybe it's the economic downturn and we're all craving escapism. Maybe we're in a Peter Pan state of not wanting to grow up. 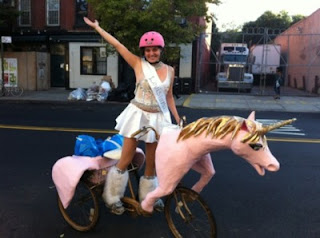 I would let you all call me a twat if I could ride a PONYCORN!