I love Christmassy music, but I think EVERYONE is sick of Slade, Wizzard and Paul McbloodyCartney by now. Having spent the last five days braving the shops, I'm now having recurring Now! That's What I Call Christmas-soundtracked nightmares about being stuck in Primark trying to find Catie some gloves that don't look like they cost 99p, and then waking with Merry Christmas (War Is Over) playing in my head on a loop for the next 12 hours forcing me to contemplate throttling myself (and Catie, so I don't have to buy her any gloves) with tinsel. They use the same repeated song techniques in Guantanemo Bay, you know. It's no wonder everyone's so stressed. Enough is enough! It's time for the little drummer boy to shove his sticks up his little festive bottom. 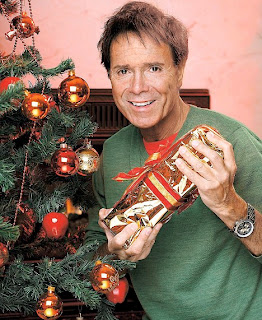 Up your bum, Cliff!

Last year I made a Christmas mix with some old favourites slightly less hammered by Asda's instore sound system -the Waitresses, Chris Rea, etc - which was lovely, but I'm already sick of it. Did you know that the full length version of Wham!'s Last Christmas is nearly 7 minutes long! 7 MINUTES! And over half of that is the chorus. I never want to hear it again.

And then there are the contemporary offerings. Seems like all the current indie-schmindies are leaping on the festive bandwagon this year in the hope of  penning a classic that will keep them in royalty cheques until they're sucking on a nursing home turkey dinner (they should never have put About A Boy on telly last year - it gave everybody ideas). But let's face it, they are all, without exception, horribly average. To have staying power in the Christmas market you're much better off aiming for tacky and irritating. Somebody needs to tell Tim Wheeler that nice won't cut it. And don't get me started on that THING they keep playing on Radio 2 that's all about the government and the cold weather. *entire paragraph of snark and sarcasm deleted in a bid to maintain some semblance of Christmas cheer*

So where can we turn for a cool Christmas? Ladies and gentleman, it will not surprise you to learn that BACK IN TIME is the only option remaining. Dean Martin, Brenda Lee, the Ronettes, Andy Williams.... you know the drill. Better yet,  dig hard enough and you'll find a whole range of fabulous versions of golden oldies. Loads of the greats recorded whole Christmas albums doing all the classics so it's easy to find a new twist on a beloved song.

Walking In A Winter Wonderland is one of my favourite Christmas songs. This ace version is by one of the smoothest, most stylin' of them all.