He seems to pop up everywhere. Housewives choice: Michael Bubbles. I can understand the appeal of his smooth grooves and contemporary crooning, perfect MOR first dance fodder, but just look at him! 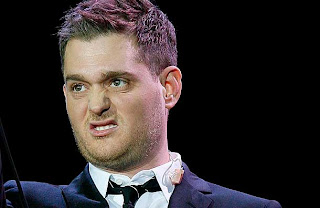 This man is supposed to be an idol. A Sex God.

But he looks just like somebody you went to school with whose name you can't remember. Richard....Bland? James.... Beige? You know, the anonymous one, second left on the third row on the school picture. Oh, he changed his hair in Year 10 and grew a bit, and everybody wondered where he'd come from. Hung around with the popular jock boys for a term, and then didn't. He was in science with Sarah P. No? NO. I don't remember him either. He just tried to add me on Facebook. I'll ignore it.

Seriously though, a pin-up? His features look like they've been randomly selected from a photofit and pasted together onto a uniformly round, pasty face. Probably by scientists in Simon Cowell's pop laboratory. Oh whatever, you're all going to buy his CD next Mother's Day. Even if it's secretly for you. Because you love him. You want to kiss him.

Anyway. This is one of the most popular UK first dance choices at the moment.I can't be snobby about his popularity, as we chose an EVEN MORE famous Michael, with an even weirder face.