What IS it about Dave Grohl? Women want him, men want to be him.

Look at that affable, beardy face, don't you want to kiss it? You hear him in interviews and you want to steal him and take him to the pub and just BRO OUT with him and hear all those super cool stories about his rock 'n roll life. "Mine's a packet of salt 'n vinegar, Dave!" you shout as he goes to the bar. "No problemo, buddy!" Dave Grohl replies.

Dave Grohl, he's just like you and me. But better. 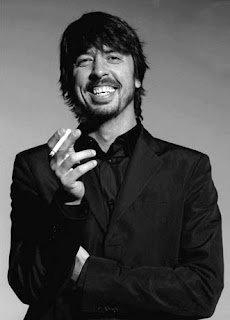 Ahhhh, who are you KIDDING? This man is basically a musical polymath who plays every instrument ever invented (citation needed) and is a terrifying perfectionist who is famous for demanding exacting standards from band members. In fact, he normally fires them and does it all himself. You're going to be taken in by a smile? This man is a MACHINE. He is one of the greatest drummers of our time, and I am suspicious of anybody who can drum really well, because it requires a disgusting amount of self-discipline which must come at the expense of something. That something is probably SOCIAL SKILLS or LIKING KITTENS.

Do not trust Dave Grohl. He is too good to trust. Dave Grohl does not want to be your friend, Dave Grohl does not want to go down the pub with you and shoot the shit. If Dave Grohl DID go to the pub with you, it would only be so he could pummel you at darts and make you take his pint back to the bar because the head wasn't right, over and over again, until you cried into the packet of salt 'n vinegar crisps that you had to buy for yourself in the end, even though he made you beg for them. And then he would fire you from your OWN LIFE for not being perfect enough.

Do not trust Dave Grohl.

Do have this as your first dance though. It's fucking great: