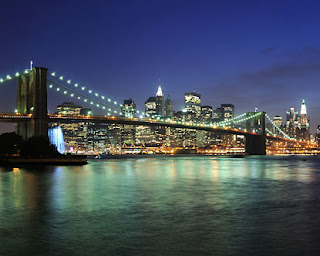 We can see the lights from Armley.... if we squint a bit
Four weeks today we will be at Manchester airport, about to embark on our first proper big holiday together. This may seem like a lengthy stretch to you, but not to us. We can see our dream adventure in the distance now, like an enormous pastrami sandwich on the horizon. It has been four long years of no big holidays, now it is four short weeks til we get to have a BREAK.

And some fun. And lots of beer.

I'm currently knee-deep in lists of things we might want to do. But you can't beat a good personal recommendation. I'm eagerly seeking hot tips and advice.

We want to steer away from the tourist stuff (I've been a few times before and done all that to death, Sam is simply not bothered) but we like the idea of doing the more pop-culture/counter-culture cool tourist stuff (like checking out the Ghostbusters building, doing live band karaoke and going to the Jim Henson exhibition that's on while we're over there) as well as trying to live as much like locals as anybody reasonably can in NYC. We're spending four nights in Manhattan, and five nights in Williamsburg, Brooklyn.

Friends, readers, lurkers, whoever you may be...

...give your best tips unto me!

Small sad voice that I won't be around for a certain party though.... *cries*.....you girls better take a ton of pictures!
Posted by Penny at 08:29