To me, the phrase "Stars In Their Eyes" has nothing to do with the 1990s Matthew Kelly ITV extravaganza. Its sole meaning lies in the little-known, long-forgotten annual Stars In Their Eyes gig, put on by a bunch of punks and record nerds in Leeds, for other punks and record nerds to come and get drunk and stupid at. I miss our Stars In Their Eyes. I miss the camaraderie, the golden years before everybody got mortgaged, married and boring. Most of all I miss the opportunity for anybody with a tenuous link to the music scene to don a wig and live out their most ridiculous hairbrush-and-mirror rock star fantasies. 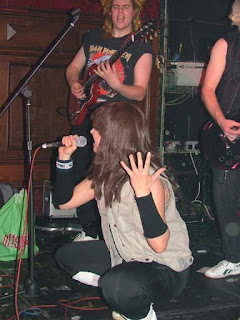 The basic principle was thus. Every Leeds band got a chance to pick another band (an actually famous one) and perform a set of five songs in the style of. And this is how I ended up as one of five girls (one actual other girl, the rest being be-wigged "girls") and singing the songs of the Bangles at 4:30pm on a Saturday afternoon.

The Bangles! What a band though. They had some real tunes, and not just the Woolworths-tastic singles either. In Your Room - great song. Hero Takes A Fall - perfection. Hazy Shade Of Winter - better than the original? I think so. Go unto Spotify now, and find their greatest hits, and you will start to believe me when I tell you that Prince actually came down from the sky and made the Bangles by breathing glossy melody into the ears of unicorns until they vomited magic sand.

MAGIC SAND I TELL YOU.


(listen to this, it's really, really good)

They don't get the credit they deserve, which probably accounts for our early billing and the fact that we got beaten to the trophy that year by Dugong doing the Pixies (audience votes only really work if your audience doesn't triple after 8pm NOT BITTER THOUGH).

I did, however, manage to hit and hold the high note in Eternal Flame.

Those days of going to gigs on school nights (we did that! every week!), spending all disposable income on screamo LPs with handwritten origami covers and drinking vodka with irn bru until loss of vision occurred.... they are behind us. However, a brief look around at my greying, fattening, wrinkling comrades shows that an alarming number of us are in wedding/covers bands now.

I guess we have Stars In Their Eyes to thank for that. For lighting our Eternal Flaaaaaame.
Posted by Penny at 07:00