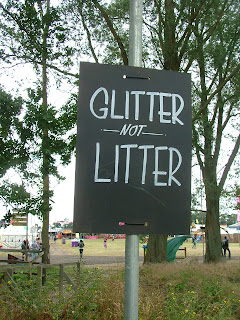 We are back, but I think at least half of our brains are still in the Garden.

-Martha Reeves and the Vandellas. Best act hands down. EVEN BETTER THAN BLONDIE. A 70 year old woman in gold sequinned trousers looking like a goddess and belting out one Motown gem after another. I loved them so much I bounced like a zebedee through the whole thing. And I think I may have fan-girl screamed a bit too much for everyone around me.

-Random Kigu abuse... by the Sunday night we were all so tired we just started pushing them over and calling them names. I know it's not behaviour becoming of gardeners, but really they were EVERYWHERE. Make your own costume, you lazy trendy people. We were a bit naughty to be honest. But we're northerners, if we didn't do this to the southern softies, they'd all be disappointed. Honest they would.

-Sam took all the leftover postcards from the wedding and wrote challenges on the back of them for strangers to do. The man in the Chai Wallah tent who took off all his clothes and put them on backwards (INCLUDING HIS WELLIES) was my hero.

-We had kazoos as part of our Saturday wasp costumes. You would be AMAZED how many people think you can just blow down a kazoo and a noise will come out. They must have had WASTED childhoods.

-Husband festival Sam is much more brilliant than Boyfriend festival Sam. We didn't lose him once - first year ever. He just wanted to cuddle me and show off his new wife to all his new festival friends. SQUEEE. 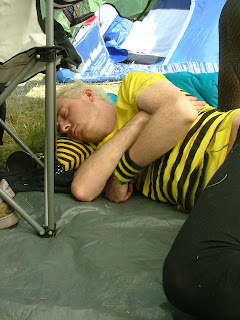 Wasp husband falls asleep on his own bottom
Posted by Penny at 12:46