"I don't understand why you can't go out with some NICE boy who isn't in a band and doesn't have so many of those ridiculous vinyl records" -My Mum, 2005 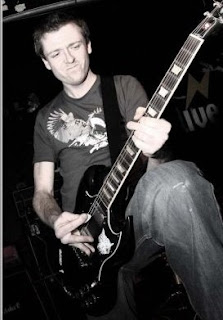 Husband-core
As a self-proclaimed "rock wife", I thought it was time I did some explaining of this slightly overblown title.

It might imply that I am married to Rock. Which I am. In a lot of ways.

Or that I have a rock 'n roll husband. Which I definitely do.

But really, I think the "rock" that goes with the "wife" is all me. I am a woman of rock. This is what my mother failed to understand, as she spoke these despairing words, moments after yet another of my relationships crumbled. I dated boys in bands because I was IN a band, and and as far as I could see there was no other option.

I gave up dating boys who were NOT in bands at the age of 18. I had tried SO HARD.

I was a girl spending all her time with a lot of cool boys. Not just the boys in my own band, but the boys in all the other bands that became our social circle. Not so great if that's your girlfriend.

And being a girl playing lead guitar (I wasn't bad at all when I was a teenager, although a lot of people I've been in bands with in my 20s would deny this- keep practising kids, or you WILL lose it) I did get a lot of attention. From everybody. Simply because, sadly, I was an oddity. And it was weird (and incredibly nerdy, in retrospect) for a girl to be waxing lyrical about how, yes, that is indeed a super-strat 1982 Japanese copy, and yes the original whammy is blocked off and I replaced it with a toilet door handle because I'm a PUNK and yes that is a Crybaby, and yes that is a vintage Carslbro 50 Top head, and blah blah blah. I wasn't even cute as a teenager, and I was painfully shy, and suddenly I had an audience of supremely geeky boys who had never found common ground with a girl before.

Boys in bands it was. And once you're in that circle, there are just... well let's say there are quite a few. 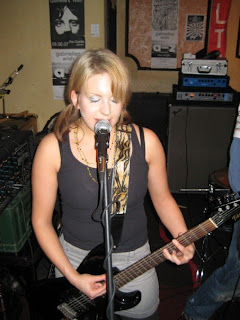 Tatako playing the Castle Hotel, Manchester - I had grown up enough to remove the toilet door handle by this point
So, inevitably, I've been out with a lot of a few boys who are in other bands. Sometimes I've even formed bands with these boyfriends - great for a while, but nightmarish for everyone when the relationship ends and the band doesn't.

But -shock!- I'd actually been a VERY good girl and never dated ANY band member of any band I was already in (and there have been lots) until Sam. Through all those years! Trust me, other girls I've been in bands with -terrors one and all- have never been that restrained *takes a moment to polish halo*

And, reader, I married him! 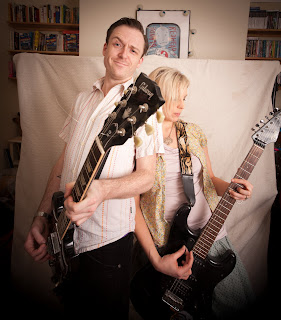 Photo courtesy of the awesome BlackEyeSpecialist
I like to call that good judgement.

I am virtually a nun, yes?

Now can you phone my Mum and tell her?

Sam and I are still in a band together now, and it's great. Practices and gigs are a time-suck, but if your other half is with you then nobody gets left home alone (of course, Leeds being Leeds we are both in two bands each, but at least half of that time we get to be together when we wouldn't otherwise).

We got to play an entire set together at our own wedding, for heaven's sake. And it was ACE fun. How many couples can say that?

Now, see Mum? You wait til we produce our own mini-Brian Eno/Guy Chambers/Dolly Parton talented brood whose song-writing royalties will keep you in luxury cruises well into your dotage.

THEN you'll be glad I didn't listen. 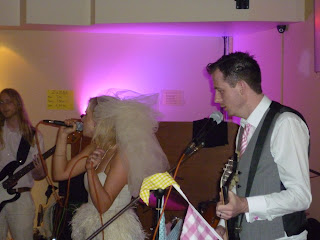 Just Married-core
Posted by Penny at 08:22