That title is not a corny or a sexy one, I promise.

When I talk about making, I mean physically MAKING STUFF.

Sam and I went to a local arts festival this weekend. It was awesome. Best bit? They had a CRAFT TENT! And we went into it and promptly landed on (woo-HOO!!!) Planet Making Stuff. It is Penny and Sam's favourite place to be. A place filled with PVA glue, buttons, pliers, sticky back plastic, glitter and pink fluffy bits. It's a place where you can't hear your mobile phone ringing and your friends screaming "we've cycled all the way to Bramley Park now where the f**k ARE you!" For maybe nearly a whole hour, the world outside ceases to exist.

Planet Making Stuff is where we spend a lot of our lives. 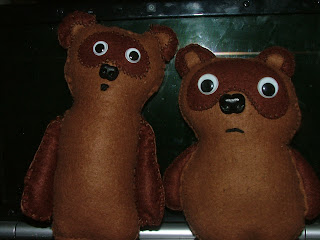 "My legs are cold!"
"I know, let's get Penny and Sam to make us some lovely trousers!"
We are not normal people. We are Makey People. We were Makey People before we met each other, and now we are Makey People together, often arguing about the correct way to make a fluffy orang-utan costume, often competing with each other to see whose model Santa Claus is the best, and always coming out with a ton of bizarre/useless stuff at the end. And a big pile of mess to clear up. (NB. Sometimes the mess doesn't get cleared up, because we are so tired after making things. Sometimes the mess just becomes part of the room, until everybody gets used to it being there.)

So our wedding was always going to be a DIY fest.

In fact, I'm fairly sure our 5 month engagement was due to the fact that we simply couldn't have fitted 6 months worth of DIY wedding projects into our house. 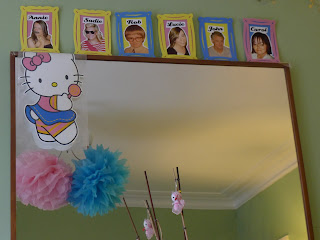 Forced to decorate front room with table place cards and pom-poms as nowhere else for them to live
Among other things....35 metres of bright pink, blue and yellow bunting, home-made matching tablecloths and giant pom-poms, endless strings and strings of pastel vellum paper hearts, hand-painted signs, a bizarre collection of unicorns, a mannequin with a pink mohican and no arms dressed in unicorn pyjamas, a Doreamon groom's cake, 6 varieties of cookies in special wedding jars, and best of all our own Penny & Sam Wedding Fanzine, with comics, puzzles, interviews and a cut-out-and-keep Nissan Bluebird.

We were considering kicking our lodger out just so we could use his room to keep stuff in. Because obviously we bought things as well, cake toppers and centre-pieces and all that business that you've never even thought about/heard of/expected to take over your life until you get engaged.

There was other stuff, but I feel tired thinking about it.

IT WAS SUCH A RELIEF TO STOP MAKING STUFF.

We fell out SO much over those 5 months. And these are two people who are doing their favourite activities in the world. I always felt I should have been doing more, and would come up with new ideas of things to make at a rate of about three a day EVERY day, and Sam would be tearing his hair out because they weren't practical, or because he couldn't make them as perfectly as he would like (I am slapdash in my approach- whereas Sam is whisper it a teeny bit anal). We bickered constantly. We wanted to be "us" but I would start to freak out if a single person somewhere in the world of Wedding Blogs had done something we were doing before, because our friends (I thought) would expect us to be completely and perfectly original. I became obsessed. Sam became a maniacal perfectionist who started taking ages over everything even though we had deadlines goddamnit.... well, you get the picture.

Anyway, the wedding came, and everyone enjoyed the details and now we like each other again. PHEW!

And now it is just a little over two weeks away from the Secret Garden Party and we are enjoying making our costumes together, and helping each other, and not snapping or panicking or stabbing each other with tacking pins.

So if you, or anyone you know, is doing even the smallest bit of DIY for their forthcoming nuptials, be kind to them. And if that person is you, be kind to yourself. You are not in your right mind. And whether you love it, or find it all a bit of a challenge, it will be worth all the madness in the end. 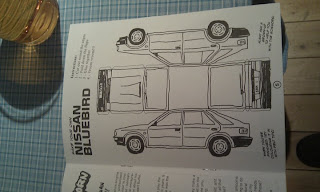 *We may not get out that much, but I promise you, we do actually have friends.
Posted by Penny at 08:40