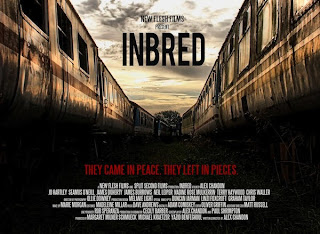 We managed to squeeze in another film at the festival in the final weekend - Alex Chandon's grisly, hilarious masterpiece Inbred. It was AMAZING, and if you have any interest in horror or comedy it's a must-see.

The action takes place in fictional North Yorkshire backwater Mortlake, when a group of young offenders are brought to the countryside by their care-workers for a weekend of outdoors-y activities. They don't realise that the villagers don't take kindly to strangers, and it's not long before there's bloodshed, and it's a race to get out of Mortlake alive.

I'm fairly squeamish when it comes to gore, and there really are buckets of it. But the jokes come as fast as the blood, and countless times I found myself peeping through my fingers only to explode into a belly laugh moments later. This will get a LOT of comparisons to The League Of Gentlemen, but it's so much more than that - it's brilliantly paced with some great performances and characters that you actually give a shit about, not to mention some stunning shots of our beautiful county (it was filmed in Thirsk). There is wit, energy and seriously good use of prosthetics. The savvy use of a small budget reminds me of my beloved Bad Taste.

It was amusing to hear Fanomenon's Martin Grund recount his experience of Inbred's showing at Frightfest down in London, with the Southerners not knowing whether to laugh or not, in case it wasn't politically correct to poke this much fun at the North.

When it's this funny, it's definitely OK.


I see on the Inbred website that the team are currently in talks regarding a worldwide release for the film. Let's hope this comes to your local cinema soon.

I promise you will never look at a carrot the same way again.
Posted by Penny at 07:00