On Being A Musical Shepherd

Our apprentice at work is leaving this week (she hates it - I don't blame her) and recently I discovered she's a bit of a metal head. You know, like a metal head in 2012 - so basically she likes Avenged Sevenfold and things like that. "I just like heavy stuff that nobody else likes!" she mumbled to me. I guess it probably would feel like you were the only one listening to Avenged Sevenfold if you were 18 years old and living with your mum in Morley.

Instead of this making me feel like an OAP (as it ought to), it got me very excited about making her a mix CD. Imagine hearing New Noise by Refused for the first time again! Imagine you'd never heard hardcore or anything, all you knew was that you loved heavy music.... then somebody puts Slayer on a CD for you.

In my head, the first time she listens to this CD it is going to be life-changing. 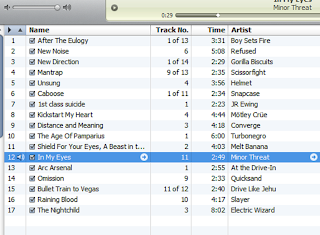 She'll probably get as far as Gorilla Biscuits and go "what's this, it sounds like it's been recorded on a chimpanzee!" and shove it in a drawer never to be seen again. I'd like to think I could at least get her into one of these amazing bands though.

I know I've missed out loads of things because I don't listen to hardcore that much anymore, so these are more like my personal favourites that I think will appeal to her. I don't know enough about Ringworm or Crass to put them on. I'm too old to start caring about bands like Ringworm and Crass now.

When I was 20 years old, a man called Simon who seemed impossibly old at the time (32?) made a mix tape for me. It was the first time I'd ever heard Sunny Day Real Estate, Leatherface, Texas Is The Reason, Husker Du, Jawbox. Fugazi, Sensefield, Hot Snakes, loads of others. That tape changed the music I listened to for the best part of the next decade. I have no idea if my CD will do that for the apprentice at work, and because she's leaving and never coming back I will probably never find out.

So I'm just going to pretend that it has changed her life, irrevocably, for the better. Just like Simon's mix tape did for me.
Posted by Penny at 07:00