SO yesterday we booked our lune de miel with a very well-mannered and helpful man in the Leeds Trailfinders office. Warring against tradition (as ever! ain't we just the pair of wedding convention-defiers!) we are actually going on our honeymoon a full 3 months, almost to the day, after our wedding.

In fact the term "honeymoon" refers originally to a period of one lunar cycle (hence "moon") after the wedding when the couple is supposed to be at their most blissed out. Nothing to do with package holidays and flopping around on sunkissed beaches.

Of course in ye olden days, weddings probably weren't generally such a military operation on the bride and groom's part, so they didn't need a week or two off work immediately after their big day simply to recuperate. I can't believe we even contemplated going straight back to work on the Monday. We were absolutely dead, and although we had a lovely couple of days as a "mini-moon" up in North Yorkshire, we spent most of the time fast asleep. In fact, I'm still not compos mentis ten days later, and have developed the slightly hilarious habit of tripping over, dropping things, spilling things and bumping into people. It's just a wedding though, right? Well actually my Mum got a stomach bug straight after, my Maid Of Honour got the flu and my stepmother now has shingles (eek!). We're ladies okay, we are sensitive to emotional stress!

Anyway, the excitement of looking forward to our First Actual Big Holiday Together Ever gave Sam and I a big old burst of energy yesterday, and I effectively wasted 6 hours of potential work time bouncing round the internet doing local research and periodically shrieking upstairs "I've found the most perfect bar/restaurant/club EVER!"

Not for us the relaxing white beaches of the Maldives!

We are going to New York City.

I really started to appreciate how much Sam and I have in common when I started looking into what we might do. Neither of us are fussed on the traditional tourist stuff, so we're going to spend 4 nights in Manhattan (only touristy things Mr S wants to do there are: catch a Broadway show, drink in a dive bar, jog in Central Park, go on the "Big Piano" and see the Ghostbusters building, all I want to do is SHOP) and 5 nights in Brooklyn.

Oh Brooklyn! How you are probably the place my husband and I live in our dreams, although in reality your pretentious youth and fashion haircuts would cease delighting and probably annoy us eventually. This is why we both moved out of Headingley after all.

And! (specifically Williamsburg)! You not only give Bad Penny her perfect chance to go on Hipster Safari, but you also have an up and coming brewing industry and a load of awesome beer nerd bars for both husband and wife to enjoy (including one with 30 arcade machines in! Sam cries with joy!), a ton of cool gigs they would like to go to, and above all A ZILLION PLACES FOR VEGANS TO EAT.

Seriously, Sam's veganism is the one thing we row about when we're on holiday. Eating vegan in Europe is MISERABLE. Especially when I'm an omnivorous foodie who needs to eat her way into other cultures, and Sam would just rather, well, eat chips and onion rings for every meal and save the moo-cows. We always end up "compromising" by eating in fusty, sandal-wearing "health cafes" where the food tastes of sawdust and we both come away hungry and utterly miserable.

So my solution was to go to the vegan capital of the world for our honeymoon.

If this works, I think it may mean we now have to go back there every year. 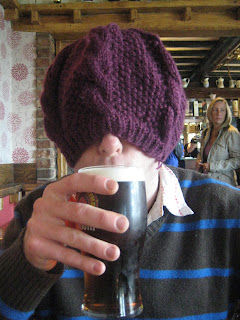