Last night I was persuaded to switch over to Crufts just to get a glimpse of my favourite breed appearing in the grand final - the awesome flat coated retriever.

My dog Max was a flat-coat, descended from a Crufts champion no less. But he was the pedigree puppy nobody wanted to buy because his paws were so massive they could tell he was going to be a hulk, and already walked with a wiggle so no good as a show dog. He was the only one left in the litter when we got there. He might have been a reject, but to us he was perfect. 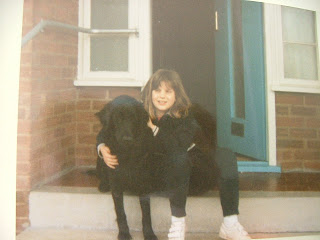 He was still just about a puppy here, sitting with an 8 year old me on the steps to my Grandma's house (check out my awesome tracksuit and wicked cowlick fringe).

Like Topsy he continued to grow and grow... and never really seemed to emerge from his puppy state of over-the-top friendliness and enthusiastic tail wagging at everyone he met. So we ended up with a giant soppy monster of a dog who everyone was terrified of when they first saw bounding towards them (but soon learned to love once they realised he was just saying hello). 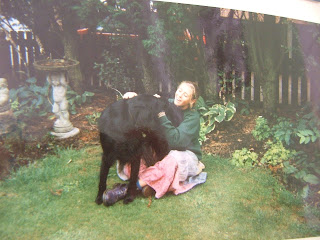 Here he is at full adult size with my best friend Catie (aged about 14 here), who will be my maid of honour in just ten weeks time. Check out her amazing purple docs and tie-dye skirt. Yeah we were cool.

For all his dogzilla proportions in comparison to the rest of his breed, Max (or Maximillion Bogbrush as we elected his "show-name" to be) was completely chicken. He never dared go into water deeper than a puddle and was often seen being chased angry terriers who he's over-eagerly tried to befriend and only ended up enraging. We used to go on canal boat holidays every October half term, and my step-dad would have to carry all 27379429303 kg of whimpering dog over the gang-plank as there was no other way to get him on and off the boat.

Max ended up with all sorts of horrible eye problems in later life, which is sadly quite typical for pedigree gun-dogs. He was quite blind (yet still very cheerful) by the time he died. Max was such a lovely animal, but I think if I ever get another dog it'll be a resilient mongrel or cross-breed. It was horrible seeing him suffer so much, and he did well to get to his 10th birthday. Poor lovey. Maxy-Bog, gone but always in our hearts. Long may your tail wag!

Naturally (in spite of being the only naughty tail wagger in the line-up) Jet the flattie won Best In Show last night. How could you resist that face though? Woof!
Posted by Penny at 15:25