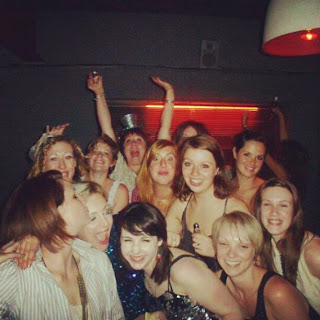 Friday night we kept it simple - just three bridesmaids and the bride for a bit of downtime and a LOT of wine drunk from the chalice of humilation - the peeny mug: 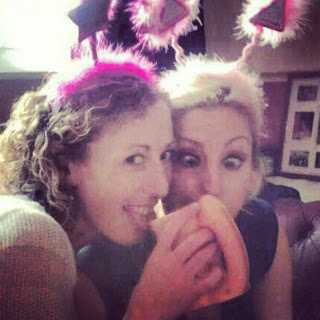 Best game of the night was Drinks Through The Ages, where we relived BF's alcohol history. This featured (among many sugary horrors) a hideous invention called Shambles which appears to have been the staple drink of the Manchester University netball team circa 2000-2002. Vodka, Red Bull and Lambrini. Even more horrible than I remember it being. BF was so excited that she got hammered pretty quickly. We only got about 20 minutes into the Dirty Dancing drinking game (you drink every time somebody says/sings the word "baby") when she had to be put to bed. I say put to bed, we tried for about ten minutes to get her to go upstairs while she screamed "it's my hen I'm not going to bed you *insert notably naughty C-expletive*" and then promptly fell asleep on the sofa.

We were up bright and early on Saturday to catch the train to Knutsford (very pretty village in Cheshire) where fifteen of us met in a beer garden and surprised BF with our amazing curly wigs in honour of her famous locks. As BF was born with a curly wig on, we had to make her a hat. Bless Sam for staying up all hours the week before and getting it ready in time. 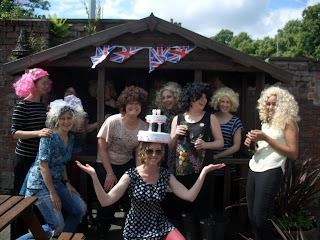 Le freak, c'est chic
The traffic was so bad in Knutsford we couldn't get a single taxi to take us to the top of Tatton Park for the food festival, so we ended up walking for over an hour to get there. Thank goodness the sun was shining, the surroundings were beautiful and we thought to take a pit stop at Sainsburys for drinks for the road. Luckily my right-hand maid and co-organiser stepped in and sorted a taxi all the way back to Manchester while I ran about flapping like a curly chicken, worrying we would never get back to the station in time for dinner. We only had a little over an hour at the festival in the end, but it was enough time to grab some scran, do a spot of cheese tasting, rum sampling and to put some Pussy in the peeny. 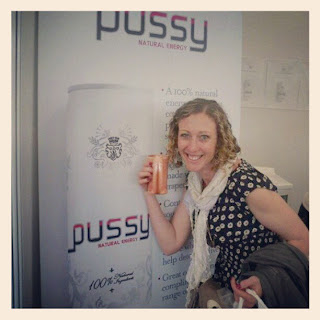 Back at home, Right-Hand Maid and I had many thwarted attempts to transfer a video message from BF's much-missed friend over in New Zealand. We wanted to show the message at the meal, but there was no way we could get the file onto the iPad. I stopped short of throwing it out of the window and instead we played it straight off the laptop just before we left the house, meaning BF blubbed her makeup off and we were ten minutes late for the taxi. I had given up stressing by this point though. It is amazing what having stoically calm and cheerful people (and a very happy BF) around you can do. 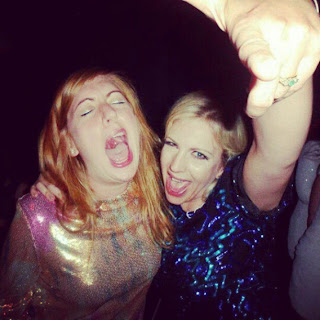 Dress theme for the evening: Something Sparkly!

We had been promised a private room for the meal so we could play games.... but we arrived to find we'd been put in the main bit. We screamed the Mr & Mrs game across a table of 18 in the middle of a crowded restaurant(luckily BF has no shame) and decided we'd postpone our CD game and play it in a beer garden later as we'd brought out an iPod dock. Got to the pub - dock fails to work on batteries. By this point I had TRANSFORMED from my usual state of chicken flapping and become a postive can-doer thinking of running my own course on positive mental attitude (Don't Let It Faze Ya' With Penny Brazier...no?). I collared Catie's colleague who let slip earlier that her flat is in nearby Spinningfields. We set off in military formation. Her boyfriend's face was priceless as he watched 17 girls and one boy in a dress march into his tiny flat, start making Jagerbombs and playing a succession of cheesy songs as BF danced around and tried to guess who picked what. 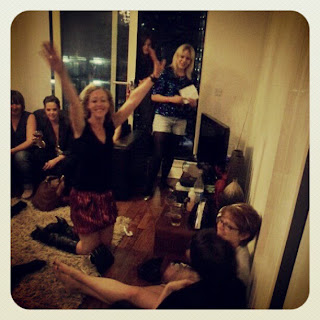 Boyfriend hiding in the bedroom at this point

The CD game was SUCH a success, and everyone was well chuffed with their personalised copies to take home. Relieved of all duties we hit Mojo's and danced til 1am. A few stragglers dropped off, and the hardcore were lead off to the amazing Corridor Bar for one of the funniest, most ridiculous nights of dancing I have ever experienced. BF ended the evening doing gymnastics in the bar. Perfect finish to the perfect night with the perfect group of up-for-it girls. There were tears as we parted, and my inbox full of heartwarming messages on Sunday. What more could you ask for? 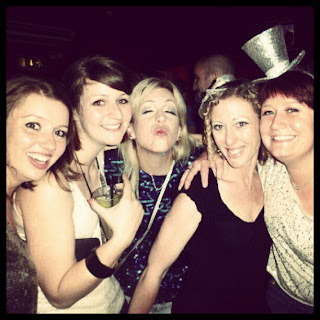