Four weeks ago tomorrow, I got married.

A man agreed to marry me! And he actually did it!

And it wasn't a thunderbolt, like I always thought it would be when I was younger. I ended up marrying a man I had known of for approximately eight years, and had been in a band with for three years before we even got together.

This would surprise my younger self (as well as the fact that I didn't marry Keanu Reeves).

I am an impatient person, and I like to think I have the measure of people fairly quickly when I first meet them.

When I first met Sam, I thought he was an idiot.

In many ways, this is probably a fair comment. But I overlooked -not only the fact that I am also an idiot- but also that as you get older and more patient, people can surprise you with qualities that may not be immediately apparent. It took me a long time to work out that there is a lot more to Sam than meets the eye.

I still did not end up with the sort of person I thought I would. I don't think Sam did either.

It's a very, very good thing. 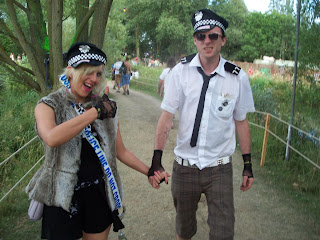 If there is a moral to this story, it probably ought to be something trite like not judging a book by its cover. Or by how loud and drunk the book is.

But I prefer to think it's more about learning to let go. Not rushing into anything. Life isn't about ticking boxes, so let it evolve and grow by itself.

The most amazing things happen when you least expect them to.
Posted by Penny at 13:09