I think it's only right I should introduce you to the third member of our little family. 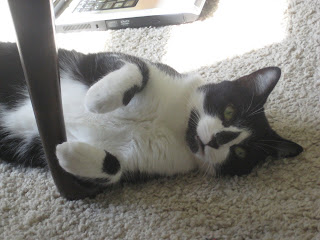 What me? I would NEVER do a wee up the side of your record collection!
This is Granville, and he is Sam's fluffy little cat.

He is very small, for a cat, and rather camp. He spends a lot of time grooming himself and posing, like a dapper little dandy boy. He sticks his nose in the air if he comes across anything he doesn't like. This includes any brand of cat food less extortionately expensive than Whiskas.

I didn't like cats that much when I started going out with Sam. I was well and truly a dog person. You know where you are with a dog, all bouncy and friendly and reliant. I couldn't work out for the life of me why Sam had a cat especially one that A. wasn't that cute and B. appeared to have a stick up his arse when it came to making friends with humans. 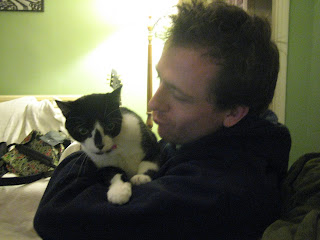 Daddy's favourite little munchkin, kissy kissy kiss (G not looking impressed)
So Granville and I had a bit of a stand-off for a good year before he finally decided he would grace my lap with his furry bottom and start purring. Then, as I would be merrily walking by, he started inexplicably rolling over onto his back in front of me and waving his paws in the air, blocking my path. Most inconvenient. Did he realise how ridiculous he looked, I wondered? Then he began springing out from behind pieces of furniture as I was walking by, grabbing onto my leg with his paws, as if I was some sort of prey. "Do you know how ridiculous you look?" I would say. Then he would skulk off, sheepishly, as if suddenly realising the folly of his ways.

Cats are strange. But Granville clearly thought I was a bit odd too. And maybe he was right. So grudgingly we built our own strange sort of loving friendship. The sort of friendship where I'd get up far too early and he'd come and fall asleep on the sofa on me while I was listening to techno (just the kind of thing you do at 6am) and I would switch on the webcam and make little films of him doing hilarious cat raving, paws aloft. And he really didn't seem to mind at all.

Now sometimes Granville would rather sit on me than Sam. I expect this is probably because I am a bit squidgier than Sam, but Sam still takes it a bit personally.

Hopefully this swaying of feline favouritism has finally prompted my husband to declare that I am now his best friend (how d'ya like that, kittypants?) and not Granville, as previously implied over the years.

Sorry G, you may be cute and fluffy, but I don't shit in the vegetable patch. 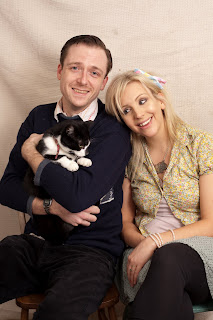 Love you really fluffy cutiekins, (now that we've finally sorted out the will...)
Posted by Penny at 15:57