Sam's Tips On How It Feels To "Do A Marry"

Yesterday we had an utterly BRILLIANT day at the Out Of Spite Festival. OOS is small weekend fest in Leeds with a load of shouty bands, and hundreds of people from all over the country who have been meeting up and growing old together over the last twelve years or so. And as we all get fatter and greyer, a lot of us are starting to get married.

My husband loves to drink lager and dispense wisdom. So, with his new expertise in the field of marriage, he delighted in rolling round letting everybody know Exactly What To Expect.

"It will be a montage! The whole day will just go by like fucking hell! And the night before you'll think - well, I'm getting married, but I still feel a bit normal - and you'll have some bubbles and you'll go to bed... and the next day you'll wake up and think 'well, this is normal' and you'll get dressed in some nice clothes and then you'll get to the altar and you'll be waiting and all of sudden you'll be like .... fucking hell this is horrible! And it'll just hit you like WOAHHH and it'll be ARGGGG and then all of a sudden she'll be there and you'll be so relieved and it's like THANK GOD..... but that's when everything starts happening all at once and it's like a montage and it all rushes by LIKE A MONTAGE and there are all these people and you'll think, well I'm having an AWESOME time but I don't really know what's going on and then there's all this food you've been really excited about eating but you don't eat any of it and you drink loads but you don't feel pissed you just feel like WOAHHH this is like a MONTAGE.... and then the next day you wake up and think.... *exhales heavily* ...WHAT THE FUCK JUST HAPPENED??" 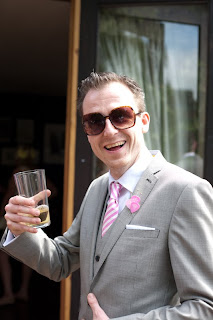