How the frk do you choose them?

My friend Ellie has abandoned the idea altogether as she has so many close female friends, it would be a case of leaving somebody out or having a Maid Army.

As for me? I was confronted with having the ideal, ready-made possee. Sam has three younger sisters, who I get on with (chorus of angels) really well. They like weddings, they like dresses, they were over the moon that their big brother was getting married. I've no doubt they would have happily accepted the task, and looked fabulous doing it.

But as I started to drop into the rabbit hole of wedding planning, I began to realise how much your maids are generally expected to do for you, how much they are supposed to be around before the wedding day itself. And although I love The Sisters to bits, I wasn't altogether comfortable with placing this responsibility in the hands of my future-in-laws.

See, when we first got engaged, I was pretty sure I was going to turn into Bride(shhh!)zilla. Oh, you know I hate that word. You know what I mean. A slightly psychotic human being who needs everything to be perfect, and wants the world to revolve around them, as this is their Moment.

Seriously, I LIKE my sisters-in-law. I don't want them to see me turn into a screechy, fanged monster with lizard scales and eyes that turn you to stone. So I didn't ask them.

As it transpired, there was only one "Zilla" in our engagement. And it wasn't me (turns out I'd rather just get shit done). But that's a story for another day.

There was only ever going to be one for me.

The girl who has known me since forever (rivals at primary school), who has seen me at my absolute best and absolute worst after 20 years of friendship. My Maid of Awesome.

Anybody who knows Catie will know she isn't backwards in coming forwards (although she's generally very lovely about it) and she had announced she was doing a speech at our wedding before we even got engaged. True to her word she did, and it was the only speech of the day that actually talked about ME (my Dad somehow managed to avoid this- probably for the best!).

And this is why, unless you are much cooler, calmer and more collected than I am, you may well need a Maid. If not a Maid, then somebody somewhere who will make that day about you - your mum, a group of friends, somebody who you know gets you, and has got your back. I might have been overwhelmed on the day, but I had the knowledge that there was somebody who was THERE for me. And Catie was there for me for the whole five months. From my (unforgettable, stupendous, unbeatable) Hen, to multiple tryings on of the dress and choosing relevant accessories, to making me dinner the night before the wedding and watching Dirty Dancing with me, to the end of the night when I was over-emotional, over-tired, and needed whisking to the hotel bar to drink cocktails instead of having to deal with any more of the venue clear-up.

My family and friends were brilliant, and I couldn't have done it without them. But without Catie, I would actually have EXPLODED.

Tonight is the first time I will have seen her since the wedding. I'm off to eat, drink and dance in Chorlton with my best friend. And, of course, my new husband. 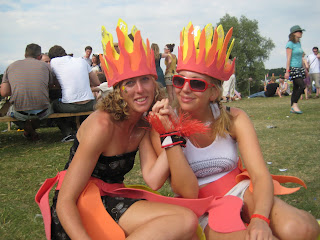