Fact you may not know about me and Sam: we were nearly on Don't Tell The Bride.

When I say "nearly on", I what I really mean is "closer than I ever wanted to be to going on".

Take two people, with two enormous 5 year fixed rate mortgages bought just before the crash (read:eye-watering). Add in a redundancy, 18 months retraining with no income, an ill-advised central heating repayment scheme and a load of other boring stuff and blah blah blah you basically end up with two very skint people who don't get out much anymore. "Love on the dole" as my father so kindly calls it. Yeah thanks a bunch, baby boomer.

Oh, hang on, so now these two people love each other very much and want to get married?

So, with empty pockets and a heart full of dreams, our Romeo decided to phone up the BBC and volunteer our services for a hair-raising reality TV show. Mistakenly believing that because I watch it, I might actually want to be on it.

Let's face it, if you know me, and you know Sam, we are more or less perfect candidates.

The picky, stroppy princess bride who loves fashion and shoes and for everything to be *perfect* and preferably done ten seconds ago. Then the hapless punk groom who would rather sit in front of Robocop with a tin of cooking lager for 3 weeks and leave the guest list to "Later" (Later is where everything gets done on Planet Sam - it's apparently a very relaxing place to be). The likelihood of being married by BA Barracus on top of a monster truck with twenty bridesmaids wearing neon green top hats would have been fairly high. More importantly, me having a screaming hissy fit before an audience of millions would have been pretty much unavoidable.

Anyway, Sam announced in the pub one day, to his sister and her boyfriend (I just happened to be standing with them) that we had been at phone interview stage, six months ago. News to me, especially since he hadn't actually proposed.

I think he was going to do that bit Later.

Anyway, I don't know what divine intervention of common sense occurred, but he never took it any further than that.

We didn't need anything close to £12,000 to have our perfect weddding, as it turns out. Which is just as well, as I can't imagine having to now face 182930483 pictures of me on Facebook wearing this on my wedding day: 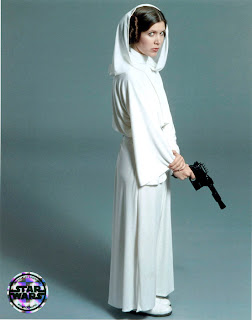 "I take you, Sam Smyth, to be my lawfully wedded wookie"
Posted by Penny at 10:47